“You made my dream come true” – “I like it, as long as it comes with a gas station” – “Reliable as hell”. The Audi employees in Ingolstadt, Neckarsulm, Györ and Brussels were amazed when one morning they found positive and critical statements like these everywhere in the company without explanation. The quotes, authentic testimonials from social networks, made for lively discussions and illustrated that delighting customers begins with each individual.

21 employees from all business areas had their turn to speak in the next phase of the campaign and underlined this message. On posters, banners, and in the internal media they described how they inspire others. However, there are not only 21 people working at Audi, but more than 65,000 customer-inspirers. That is why a central element was a call to all to tell their stories. The project team analyzed the more than 3,500 returned surveys, prioritized the values and published 100 selected stories in the internal media. One thing was clear: The values are not abstract or new, they are already anchored at Audi.

“We received a lot of positive feedback during the seven month campaign,” concludes project manager Stephan Ippers. “This has shown us that the decision to convey the connection of complex topics such as strategy, brand and self-image in a more unusual way was the right way to go for Audi.”

There was also positive feedback from outside of the company: The campaign was awarded the German Prize for Business Communication and was nominated as a finalist for the German PR Award. 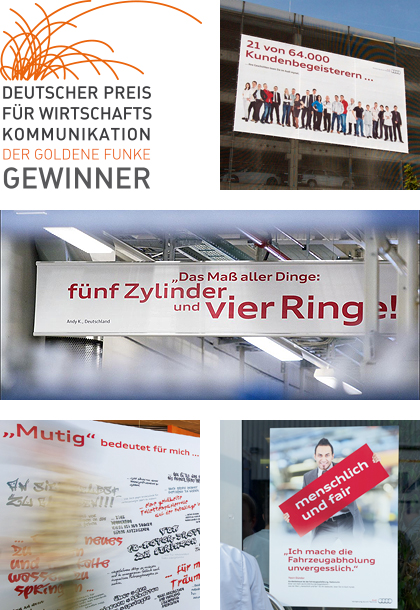